The City of Busan to Replace its 1,000 Buses with Fuel Cell Buses

Sejong, September 22 - On September 19, the Ministry of Environment (Minister Han Wha-jin) signed a Memorandum of Understanding (MOU) to build a hydrogen economy by replacing 1,000 buses in the city with fuel-cell buses by 2025. As a part of efforts to support Busan's bid to host the World Expo 2030, the Ministry of Environment signed a memorandum of understanding (MOU) with the Busan Metropolitan Government, Hyundai Motors, Busan Port Authority, Busan Metrobus Company Association, and Busan Techno Park. The MOU was signed to build a hydrogen economy in the city of Busan through cooperation among transportation, industrial, and port authorities and to increase the competitiveness of the city of Busan in the bid to host the World Expo 2030 by providing a good example of the carbon-free exhibition.

The Busan Metropolitan Government and SK E&S have partnered to build charging stations in tandem with a children's cultural center, Deullak Nallk, for residents to more easily accept the charging stations. In addition, to build a regional hydrogen economy, the Ministry of Environment will nurture ten companies specializing in hydrogen energy and run human resources training programs. 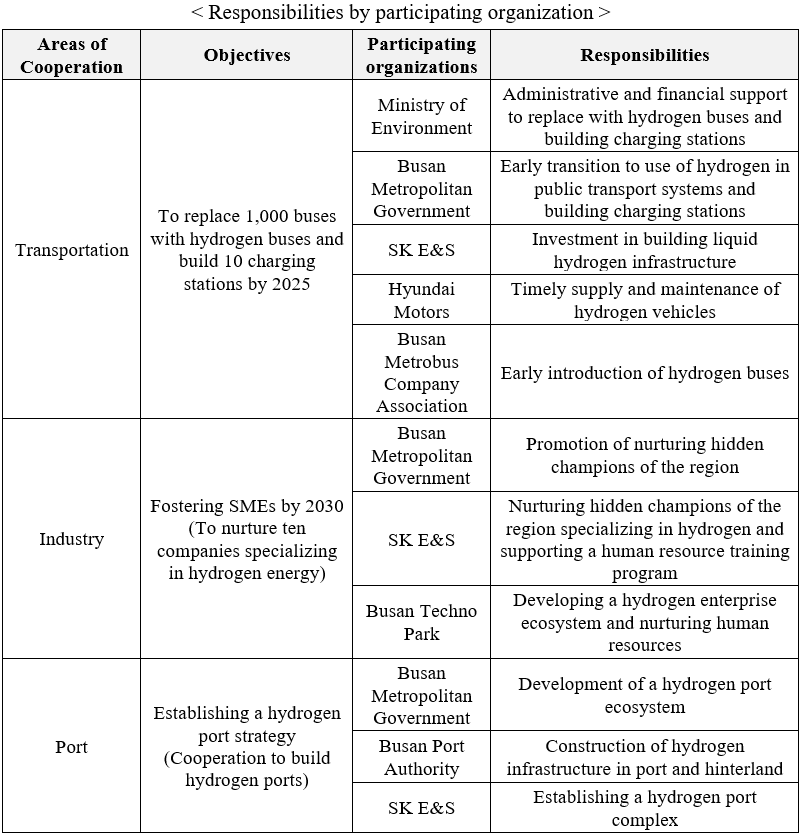 Minister of Environment Han Wha-jin said, "As Korea is the world's leader in the field of hydrogen vehicles, we will help Busan to gain its competitiveness in bidding for the World Expo 2030. The Ministry of Environment will fully support Busan in achieving carbon neutrality, and hydrogen's becoming Busan's new growth engine by building a regional hydrogen ecosystem."