▷ Special Hydrogen Mobility Zone to be established in Pyeongtaek Port

The ministry plans to supply 850 hydrogen-powered commercial vehicles in Pyeongtaek-si by 2030, using the areas of Pyeongtaek Port, Godeok New Town, and Jije Station as strategic bases. It also plans to create a special hydrogen mobility zone in Pyeongtaek-si. The ministry will supply 250 hydrogen trucks to be used in logistics around Pyeongtaek Port Hydrogen Transportation Complex, which will be completed next year. The ministry will also supply 150 hydrogen street sweepers and 200 hydrogen buses around Godeok Hydrogen Station which will be established around Godeok new town.

The ministry will build liquid hydrogen fueling stations in the three bus garages in Pyeongtaek-si: Wolgok, Jije station, and Anjoong. Among the three bus garages, the nation's first hydrogen fueling station will be built in the bus garage in Jije station. By 2030, 250 regional buses and city buses will also be converted to hydrogen buses. The ministry will carry out hydrogen car carrier trailers along the route from Pyeongtaek Port to nearby vehicle manufacturing plants of Hyundai Motors and Kia starting in December. 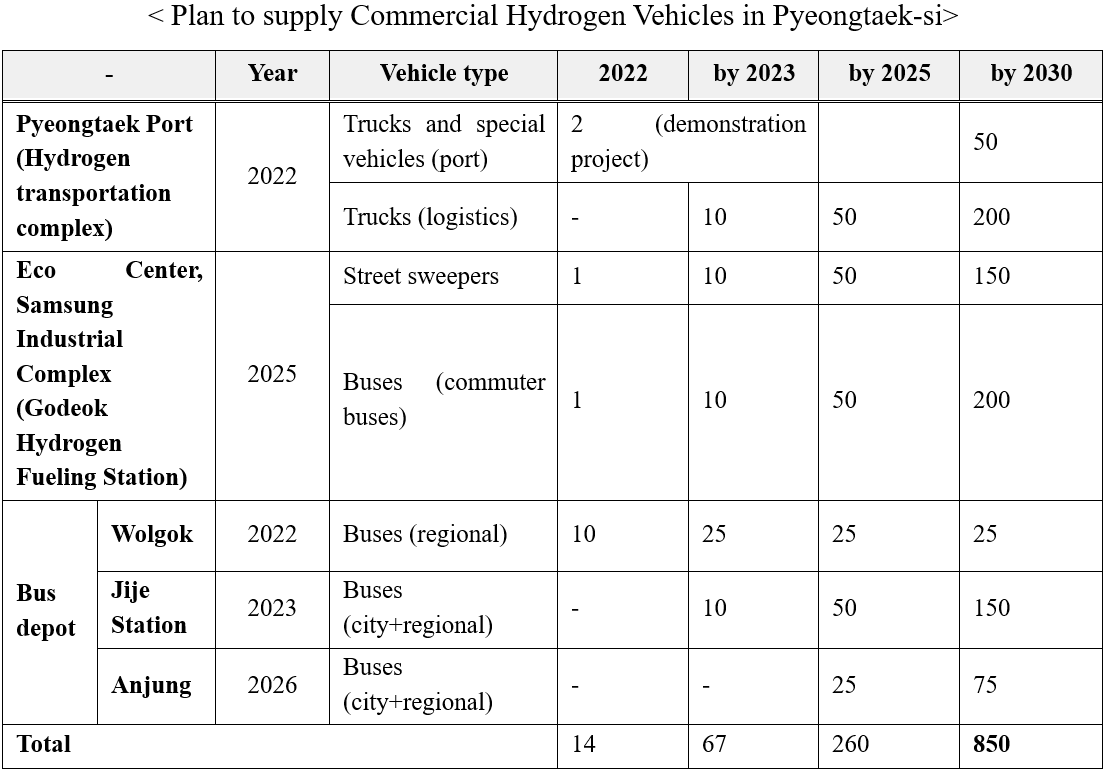 The ministry will also expand hydrogen refueling stations to supply more commercial hydrogen vehicles. Currently, Pyeongtaek-si has three hydrogen fueling stations in Paengseong-eup, Hyeondeok-myeon, and Jangan-dong, with one charger in each station. Seven new chargers2 will be installed, making Pyeongtaek-si the most convenient city for charging in the Greater Seoul area.

It is believed that the MOU will accelerate the conversion of commercial vehicles, including buses and trucks, to hydrogen mobility. Internal-combustion engine buses emit 30 times more greenhouse gases and 43 times more fine dust per year than passenger cars. In comparison, mid-to full-sized trucks (5 to 10 tons) release 20 times more greenhouse gases and 25 times more fine dust yearly, making them the critical air pollution sources in the transportation sector3. Buses and trucks are advantageous for converting hydrogen vehicles, which can travel longer distances (about 400 km) than electric vehicles and the shorter time required for refueling (15 to 20 minutes). Hydrogen trucks and hydrogen buses are scheduled for launching in the first and latter halves of the year, respectively. Therefore, it is possible to promptly replace internal combustion engine buses and trucks with hydrogen cars. It will make reducing fine dust and greenhouse gas emissions.

Pyeongtaek-si focuses on improving air quality and reducing greenhouse gas emissions, making it an ideal region to lead the project. The city serves as the transport hub of Gyeonggi-do Province. Accordingly, the city has the largest amount of greenhouse gas emissions in the transportation sector nationwide and the second-highest level of fine dust, so the effect of this hydrogen commercial vehicle conversion4 is expected to be great. In addition, once a hydrogen transportation complex and a blue hydrogen production facility are established, the city will set up a regional hydrogen ecosystem.

The Minister of Environment, Han Jeoung ae, said, "Pyeongtaek-si will be an example of the hydrogen mobility project. The ministry will support the nearby cities, including Hwaseong-si, Anseong-si, and Yongin-si, so that the cities can implement a similar project in their regions in the future."  She added, "The ministry also plans to partner with local governments and companies to build a liquid hydrogen fueling station in line with demand for commercial hydrogen vehicles."

1 Aimed at setting up the regional ecosystem that links hydrogen production, distribution, and utilization through supplying commercial hydrogen vehicles