▷ Cabinet meeting report on the LEDS and NDC

▷ Carbon neutrality will be attained by 2050 by the expansion of renewable energy based electric and hydrogen production & use, energy efficiency improvements, and acceleration of development and commercialization of future technologies for decarbonization

□ The Ministry of Environment (Minister Cho Myung-rae) announced that the government's 2050 LEDS* and 2030 NDC** plans for responding to the climate crisis, which were created in coordination with the relevant authorities were ed at the December 15th cabinet meeting.

○ These plans were drawn up by a pan-governmental body which was a cooperative effort of 15 governmental departments. Expert discussions and public panel discussions were held, in order to include extensive social input. The plans were also deliberated by and voted for by the Presidential Committee on Green Growth.

○ Through the 2015 Paris Agreement, the international society agreed to hold the mean global temperature rise to under 2℃ relative to the pre-industrial era. In order to achieve the more ambitious goal of limiting it to under 1.5℃, the UN member states agreed, as a first step, to submit LEDS and NDCs' by 2020.

○ The LEDS is the national strategy to achieve carbon neutrality by 2050. It proposes a long-term vision and national strategy, and the NDC is a binding goal to reduce greenhouse gas (GHG) emissions to implement carbon reduction by 2030.

□ The government's title for the LEDS is the "2050 Carbon Neutral Strategy of the Republic of Korea towards a Sustainable and Green Society." Under the vision of achieving carbon neutrality by 2050*, the following 5 basic directions and departmental strategies were proposed.

* Reduce as much human-made GHG emissions as possible and absorb the remainer (through forests, etc) or remove them through Carbon capture, utilization and storage (CCUS), eventually achieving net-zero emissions. 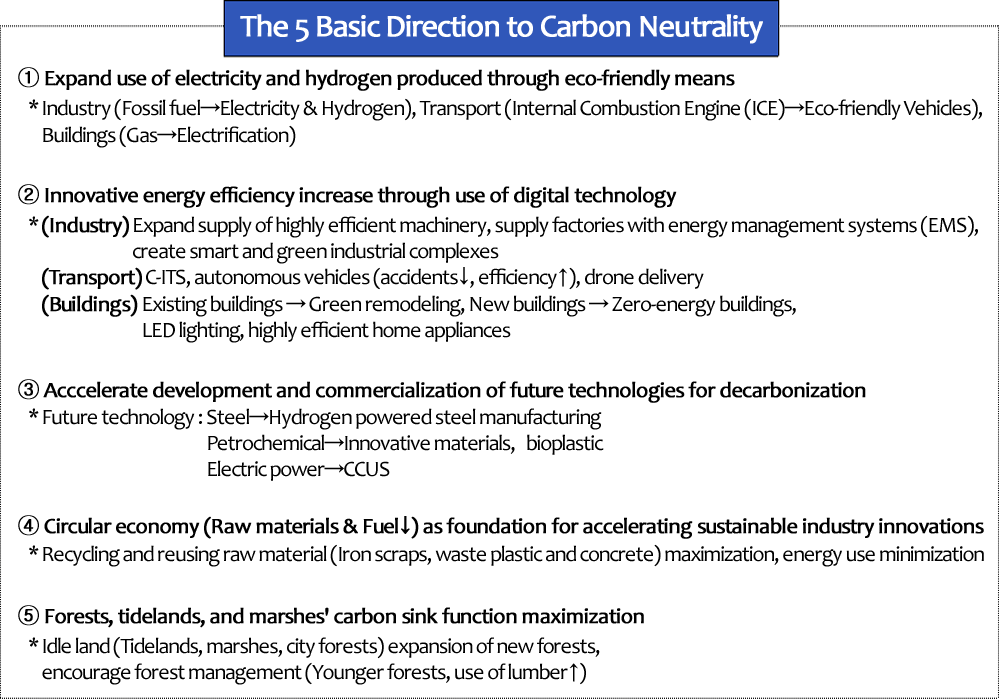 □ (Energy supply) Transition from fossil fuel generated power to renewable energies and green hydrogen and active use of CCUS technology to move forward to carbon neutrality in the energy sector.

○ Also, we will create an affordable and stable supply system for hydrogen-based energy*, which will be the core of the 2050 Carbon Neutral Strategy. To overcome our geographic disadvantage of being on a so-called energy island, active measures must be considered in order to supplement our energy generation, for example, creating the Northeast Asia Supergrid.

○ In order to achive fundemental GHG reduction in energy intensive industries (Steel, petrochemicals) new technologies of the future such as hydrogen powered steel manufacturing and bioplastics will be developed and commercialized to replace coke and naphtha.

○ 4th industrial revolution industrial technologies such as IT will be utilized to accelerate integration of smart systems into factories and industrial complexes. Energy intensive facilities such as boilers, heating furnaces, and motors can be made more efficient through this process.

○ Also, in order to transition from the linear economic system of energy consumption and waste to a circular economy, the use of renewable raw materals such as steel scraps, waste plastics and concrete will be increased. In order to minimize raw material and fuel use, eco-friendly designs and the right to repair will be encouraged and strengthened.

□ (Transport) Use of vehicles such as cars, trains, planes and ships that run on clean energy sources such as electricity and hydrogen will be encouraged. Autonomous vehicles and transport supply management systems that use digital technologies will be implemented to create the base for transport industry carbon neutrality.

○ First of all, widespread commercialization of eco-friendly cars will be accelerated, and in cases where eco-friendly car supply is difficult, biofuel use will be expanded.

○ Also, the establishment of the C-ITS through use of digital technologies coupled with expanded use of autonomous vehicles will raise the effiency of transport supply and reduce energy use.

□ (Building) Insulation and air tightness functions will be enhanced and highly energy efficient products must be used to minimize energy use in buildings. Clean energy use such as solar and thermal power will be encouraged to raise the energy self-sufficiency of buildings as well.

○ In order to maximize energy efficiency, existing buildings' green building transition will be encouraged and new buildings will be gradually mandated to meet net-zero standards.

○ Also, energy efficiency of in-building products such as lighting, home and office appliances will be raised. In the long run, electric and hydrogen based solutions will be considered to replace gas in heating and air-conditioning as well as cooking.

○ Also, we will foster new industries based on recycling the by-products of agriculture, livestock and fishing distribution.

□ (Carbon sinks) Strengthening natural and ecosystem based solutions to improve carbon sink capabilities of forests, tidelands, and marshes, allowing them to contribution to our carbon neutrality goal.

○ Toward this goal, we will establish city forests and gardens in our immediate environment. Also, we will restore damaged lands and core ecological axes and grow forests in idle lands in order to expand our carbon sinks.

○ Also, we will maintain forests' carbon sink capabilities at its maximum through species conversion and forestry.

○ First, financial resources, policies, and legislative efforts to create the norm for carbon neutrality in the public sector will be supported by public initiatives. The emission trading system, taxation system and expenses will be upgraded to meet carbon pricing standards.

○ All-out promotional efforts and environmental education will be implemented to put carbon neutrality at the center stage of the economy and society at large as well as to encourage people's participation.

○ As a competent ministry of policymaking, the Ministry of Environment will ensure the peoples' participation in the decisionmaking process, strengthen municipalities roles and establish the foundation for a green fund.

□ Member nations across the globe submitted* their NCCs to the UN before the Paris Agreement in December, 2015. It was agreed that before the 2021 implemtation of the Paris agreement, the goal could be updated until 2020.

○ Following the submission of the June 2015 NDC, the Republic of Korea established the "National GHG Emissions Reduction Roadmap" in July, 2018. In December, 2019, the ROK established the Enforcement Decree of the Framework Act on Low Carbon. Thus, we have continued to work toward reducing emissions and such efforts were the basis upon which we base our NDC.

□ The most recent NDC reinfoces the transparent reporting of the estimated emissions which are highly correlated with economic growth. Also, we have adopted the absolute emissions calculation method, which has more international credence. Based on these, efforts, we finalized our NDC goal of 2030 at 24.4% reduction compared to 2017 levels. 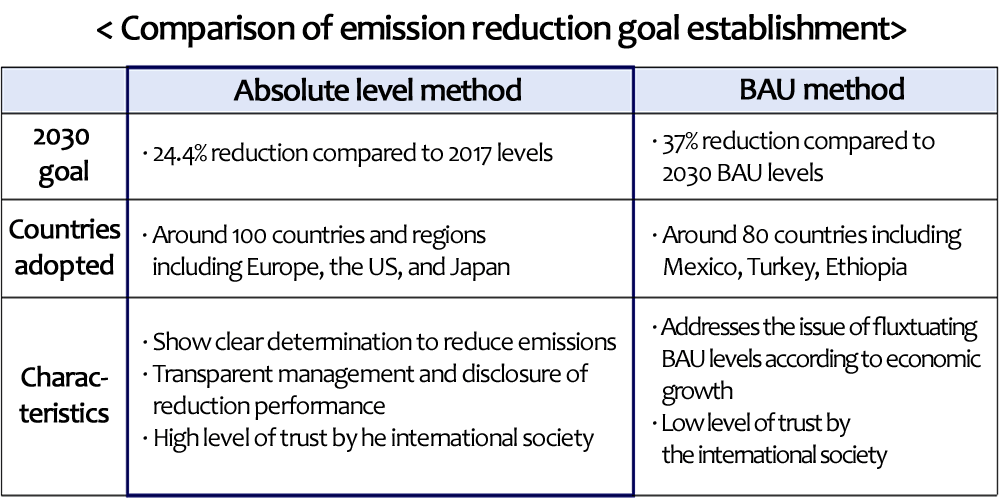 ○ Also, taking into account that this is a long-term vision that will achieve carbon neutrality by 2050, we will take active measures to achive our 2030 goals before 2025.

□ The LEDS and NDC, which have been adopted by the Presidential Committee on Green Growth and the Cabinet meeting, will be translated into English by the end of this year and submitted to the UN.

□ Additionally, the government will take step by step follow-up measures to implement the LEDS and NDC.

○ In addition, the 2050 Carbon Neutral Scenario will be the basis of core policy tasks to achive net-zero, which will be finalized by next year's end. These will be incorporated step by step into the national plan as well.

○ Also, social discourse must be accelerated surrounding the upward adjustment of the 2030 emission reduction goal. We hope that this will allow the submission of a further ambitious 2030 NDC goal to the UN during this administration.

□ Minister of Environment Cho Myung-rae said, "The 2050 Carbon Neutral Strategy is a daunting task, but it is a necessary undertaking for the sake of humanity's survival and for the Republic of Korea's transition to a pace setter."

○ He added, "The government will do its utmost to implement carbon neutrality with confidence and a certainty in our policy direction. We ask the industry sectors and all our people to actively join the effort in accomplishing this goal."