(Ref.) Joint update of the environmental authorities of Korea and China on their fine dust response.

▷ Ultrafine dust (PM2.5) concentrations showed a marked decrease in both Korea and China.

▷Both countries' policies to reduce PM2.5 have made progress.

▷Air quality improvement is an urgent task for both the two countries, and the environmental authorities in each are committed to reducing domestic emissions and reinforcing international cooperation.

○ This joint update had been prepared for three months after it was first discussed at the "Korea-China Exchange Meeting for a Seasonal Management System," held on November 13, 2020.

< PM2.5 Concentrations in Korea and China > 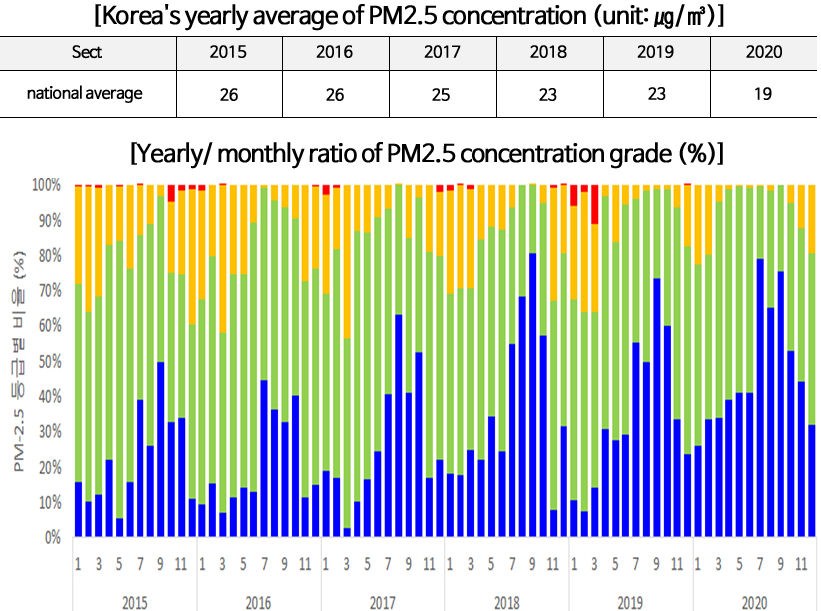 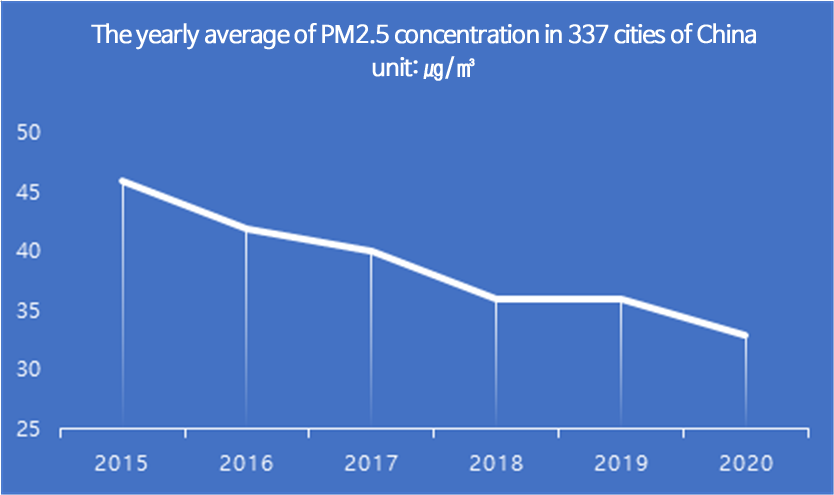 < Outcomes of Fine Dust Policies by Both Governments >

○ First, a total of 635 large business establishments equipped with the smokestack tele-monitoring system (TMS) emitted a combined 13,518 tons of PM2.5-related air pollutants in December 2020, down about 32% from the 19,894 tons registered in December 2018.

- The reduction is attributed to large businesses' preemptive and voluntary efforts to cut airborne emissions, in addition to the government's tightening of emission standards and other regulations. 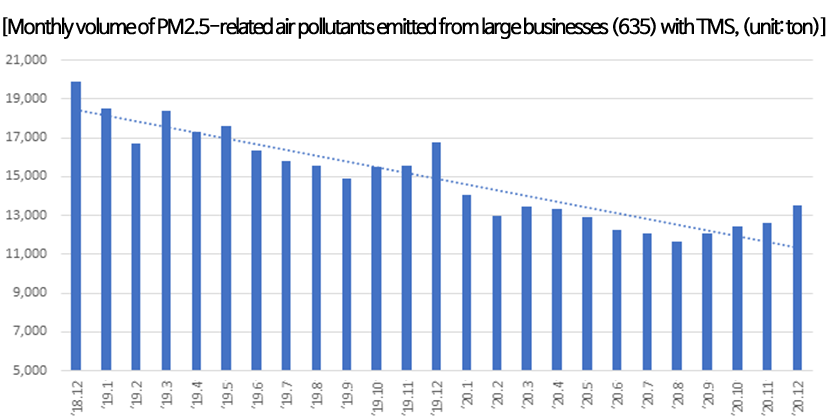 - The reduction is attributable to the government's proactive measures to reduce coal-fired power generation by shutting down aging coal-fired power plants early, improving air pollution prevention facilities, halting operation during the spring and the seasonal management period, and enforcing an upper limit on emissions.

- At the end of December 2020, 1.34 million Grade 5 vehicles without air pollution control equipment (diesel particulate filters, etc.) were on the road. The figure dropped by about one million from the 2.35 million vehicles recorded in late December 2018. 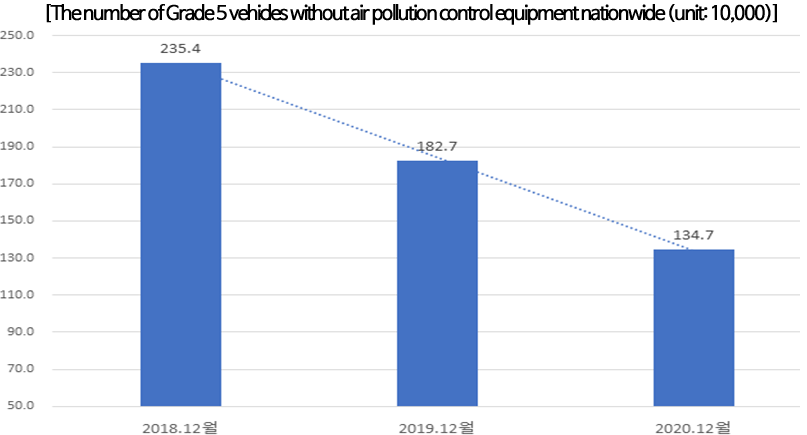 - Such progress was made possible as the public endured inconveniences and engaged in the government's decision to launch emergency emission reduction measures and control operation during the seasonal management period along with the government's support in scrapping Grade 5 vehicles early and installing air pollution control equipment.

○ The Ten Articles on Air Quality (大氣十條) promulgated in 2013 and the Three-year Action Plan on Defending the Blue Sky (藍天保衛戰三年行動計劃) announced in 2018 clearly lay out the overall concept, fundamental goals, and key tasks for air pollution prevention and control and ed the roadmap for Defending the Blue Sky. The major policies and progress follow:

○ First, the Chinese government pushed forward with optimizing the industrial structure, promoting green industrial advancement, and cracking down on those businesses that are decentralized, disordered or polluting (散亂汚).*

*They are subject to intensive crackdown and control as they are widely dispersed (散), deficient in various registrations or licenses, such as business establishment registration or emissions permits (亂), or emitting excessive pollutants (汚).

- In the steel sector, annual production capacity was cut by 200 million tons and the entire 140 million tons of substandard steel (地條鋼)* output per year were eliminated. The coal-fired power plants and steelmakers were overhauled to reduce emissions to ultra-low levels. As of late 2019, an aggregate 8.9GW in coal-fired power generation capacity had completed the transition to ultra-low emissions, while about 620 million tons of crude steel (粗鋼)** output had been  transformed or were under transformation.

* It is produced in electric induction furnaces from scrap iron and steel, making chemical composition and quality difficult to control.

** Steel ingots, which are produced from ordinary steel manufacturing processes.

○ Second, the energy grid is being restructured, while a system of cleaner, low-carbon, highly efficient energy is being implemented.

- The Chinese government shut down small industrial coal-fired facilities, saved energy, and implemented a transition to ultra-low emissions along with a comprehensive control on coal-fired boilers. A focus was put on reducing the use of loose coal (散煤)* in the Beijing-Tianjin-Heibei area and its surroundings as well as the Fenwei Plain. Loose coal is no longer burned in about 25 million households.

* It refers to raw coal with a high sulfur content, used for small boilers, residential heating and cooking.

- In China, the percentage of coal consumption among the primary energy sources steadily decreased between 2013 and 2019. In 2019, national coal consumption accounted for 57.7%, down 1.5%p YoY, while green energy consumption increased by 1.3%p YoY to 23.4%.

○ Third, the government promoted a restructuring of shipping and implementation of a green transportation system.

- In 2019, railways delivered just under 4.4 billion tons of freight in China, up 7.2% from the previous year. This figure is 2.1%p higher than the volume of goods transported by road.

- The China 6 program* took effect covering general gasoline- and diesel-powered vehicles across the country on January 1, 2019. China 6 was expanded to include light-duty vehicles in key areas on July 1, 2019 and nationwide on July 1, 2020. Between 2016 and 2019, the government discarded 13 million "yellow label" vehicles that failed to meet Chinese fuel standards and old vehicles that emitted excessive pollutants.

- Clean energy vehicles were proactively produced, which has boosted a rapid growth of China's renewable energy vehicles since 2010. Currently, electric buses account for up to 60% of all buses across China, from just 20% in 2015.

- An effort has been underway to turn rice straw into a resource, and the analysis of satellite data showed that the area of burning rice straw decreased about 29.8% between 2015 and 2020.

○ Fifth, an effort has been underway to strengthen competencies and advance science and technology as well as build a national air quality monitoring network.

- A total of 1,436 monitoring stations were established to enhance data accuracy. By analyzing causes for heavy pollution and conducting management projects in the Beijing-Tianjin-Heibei area and its surroundings, the government identified patterns of ultrafine particles in the fall and winter seasons and causes behind heavy air pollution in those areas. Importantly, follow-up studies were conducted on "one solution for each city" in the targeted areas and a platform was launched to share and manage data, offering a scientific basis for accurate and science-based solutions to air pollution.

- The government continuously raised the public's environmental awareness, promoting the practice of green, low-carbon lifestyles and the reporting of illegal emissions so that the spirit "since we breathe together, we must also fight together (同呼吸 共奮斗)" becomes the norm of the public behavior in society.

□ There has been a close bilateral cooperation between Korea and China on their journey towards improving air quality in each country.

○ They signed the "Korea-China Environmental Cooperation Plan 2018-2022" in 2017 and launched the Korea-China Environmental Cooperation Center in Beijing in 2018. In November 2019, the Environment Ministers of both countries signed the Blue Sky (晴天) Plan*, which aims to expand bilateral cooperation in air quality from the current level of survey and research to the overall pollution prevention and reduction efforts, such as forecast data sharing, technology cooperation, and policy exchanges.

○ In the year of 2020 alone, both countries held more than 30 meetings, including the 2nd Korea-China Annual Environment Ministers Meeting (Nov. 2020), where the two facilitated exchanges in the sectors of policy, forecasting, technology and industries.

○ Also, the two countries are engaged in policy sharing, operation of joint training programs, and people-to-people exchanges at the local-government level so that their capacity to reduce fine dust can be reinforced.

□ Meanwhile, both governments are pushing ahead with policies to respond to seasonal high concentrations of fine dust.

□ In Korea, since 2019, the "Seasonal Fine Dust Management System" has been implemented from every December to the following March nationwide.

○ The average PM2.5 concentration has stood at 22㎍/㎥ over the past two months, from December 2020 to January 2021, when the 2nd Seasonal Management System was implemented. The figure dropped 15% from 26㎍/㎥ over the same period last year and 24% from 29㎍/㎥ three years ago.

□ The Chinese government has conducted the Action Plan for Comprehensive Management of Air Pollution during Autumn and Winter (from Oct. to Mar.) for four consecutive years since 2017 and made a remarkable progress. In the Beijing-Tianjin-Heibei area and its surroundings, for instance, the average PM2.5 concentration in the autumn and winter seasons dropped 32.7% and the number of days with a "very unhealthy" level (PM2.5 concentration from 150 to 250㎍/㎥) decreased 62.2% between 2016 and 2019.

○ In October 2020, the MEE and the relevant provincial and city governments jointly announced both 2020-2021 Autumn and Winter Action Plans for Comprehensive Air Pollution Management in Beijing-Tianjin-Heibei and Surrounding Areas, Fenwei Plain and Yangtze River Delta.

□ Both countries agreed to continuously share progress of this measure for high concentration seasons and decided to cooperate with each other on reviewing the performance of each country and designing the next round of plans after implementation.

□ Both governments said that people of each country desperately hope to see improvement in air quality. The environmental authorities also emphasized that both countries will improve their national as well as the intra-regional environments and enhance the wellbeing of their peoples by reducing emissions "separately and together" and strengthening cooperation.

□ "The Korean government will take every possible measure in a decisive manner so that people can see a blue sky and clean air every day," said Han Jeong-ae, Minister of Environment.

○ She said, "This joint statement symbolizes the cooperative relationships between Korea and China on fine dust response. Looking forward, the Korean government will strengthen cooperation with neighboring countries, including China, so that this fine dust issue can be ultimately resolved in Northeast Asia."

□ Huang Runqiu, Minister of Ecology and Environment highly evaluated the outcomes of fine dust reduction policies of the two countries, saying, "China will unwaveringly move forward to green, quality, and sustainable growth while promoting a harmonious symbiosis of people and nature."

○ He added, "China will win the war against pollution by taking scientific and rule-based management to reinforce both PM2.5 and ozone management. Also, we will engage proactively as well as openly in bilateral and multilateral cooperation with neighboring countries, including Korea, and contribute to improving the quality of regional and global ecology and environment."